On July 10, 2010 ESA's Rosetta spacecraft imaged asteroid Lutetia within an estimated distance of 3170 kilometers. Lutetia (the largest asteroid yet visited by a spacecraft) was discovered in 1852 from the Paris balcony of French painter turned astronomer Hermann Goldschmidt. To honour his home city, he called it 'Lutetia', after the Roman name for Paris. 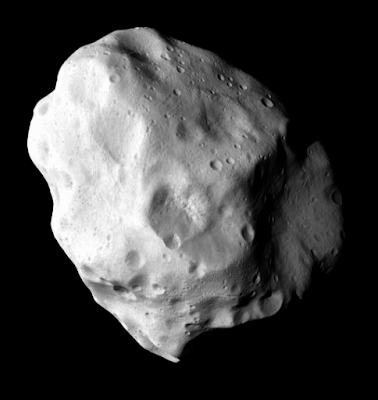 Lutetia imaged just before its closest approach with Rosetta

At a distance of 36 000 km, Rosetta took this image of Lutetia with the planet Saturn in the background.

Next Rosetta rendezvous, scheduled for 2014, is with comet 67P/Churyumov-Gerasimenko. This comet rendezvous is the ultimate goal of Rosetta in the attempt to try to solve some of the enigmas of our Solar System.

by Ernesto Guido
Pubblicato da Team a 11:12 AM

i love astronomy and i like this informative blog...hope you can visit my blog...

I don't understand why this doesn't have any comment, this is an awesome picture! What kind of software did you use to model it? Anyway, great blog, keep up the great work =)

Wow this stuff is really cool, keep up the great posts!

Hello ...
I've always had great interest in astronomy ...
The blog is very interesting and enlightening ...
Congratulations ...

Yeah, sure enough this is a fantastic article about the astronomy, this deserves compliment!

with this article, i'm now about asteroid Lutetia pic. thanks and great blogs.

The blog is very interesting and enlightening.

I'm new to blogging. I like astronomy and would like to subscribe to your blog but I can't seem to figure out ow to do it!

Congratulations on being a blog of note the other day! Good work! When you have a minute, you're invited to drop by my two blogs.

This is an awesome picture!

thanks for the picks!
this is intriguing!

That is really fascinating stuff! The pictures are great!

tis is about sky and the environments, you so col dude .. i like it