Only few days after the bright sungrazing comet of November 13/14, another new bright comet diving into the Sun has been discovered on Nov. 17 by Michal Kusiak using the images taken by SOHO spacecraft. This object too belong to the famous Kreutz-group, a family of sungrazing comets that are named after German astronomer Heinrich Kreutz who first studied them in the details. These comet fragments passes extremely close to the Sun at perihelion and usually they completely evaporated during such a close approach. 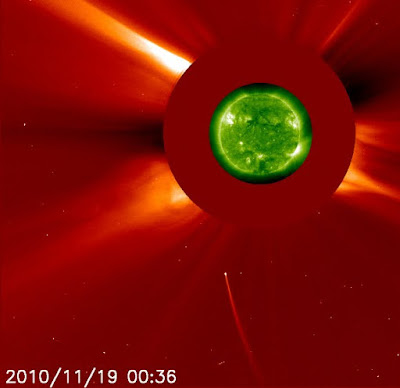 C2 Movie (click on the thumbnail for a bigger version)

We've had many bright Kreutz comets this year... A sign of a big one on its way?

Recently, different studies (Sekanina & Chodas 2007; Knight & Hearn 2008) have shown that the flow of Kreutz comets (correct of all systematic errors) increased. In the years since 1997 to 2002 for the Kreutz comet brighter that eighth magnitude has been calculated an average of about 83 new discoveries each year, while in the period 2003 - 2007 the average annual discovery rate risen to 125. This increase also applies to the findings of comets brighter than sixth magnitude where there was a increase in the flux of comets around 80%.

Sekanina and Chodas (2007) noted the increase in raw discoveries and suggested it may be “an early warning of another cluster of bright sungrazers approaching the Sun in coming decades.”

On November 18, 2010 the leading expert on Kreutz comets (reduced the observations of almost all of SOHO's ~1950 comets), Brian Marsden passed away after a prolonged illness. He will be remembered as contributing much to celestial mechanics and the dynamics and orbits of minor bodies of the solar system and as having an encyclopedic knowledge of the history of astronomy. Obituary on Sky & Telescope website and on mpec 2010-W10

Fantastic photo. I put it up on my blog.