After posting on the Minor Planet Center's 'NEOCP' webpage, this object has been found by several CCD astrometrists to show cometary appearance. We performed some follow-up measurements of this object while it was still listed in the NEOCP. Stacking of 14 unfiltered exposures, 180-sec each, obtained remotely on 2011, June 07.4 from the Tzec Maun Observatory (near Mayhill, NM) through a 0.35-m f/3.8 reflector + CCD, shows that this object is slightly diffused, with a hint of elongation toward the north-east. 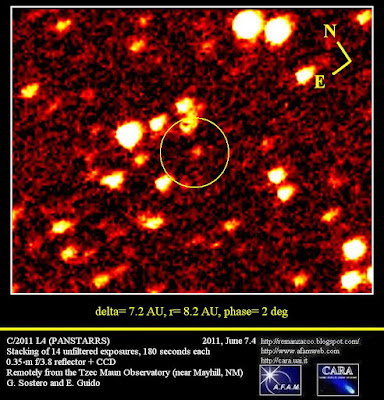 According to this very preliminary orbit based on an arc of only 2 weeks, this comet might become a bright object ( ~ magnitude 2) around perihelion in March-April 2013 and better placed for southern hemisphere. Next weeks will tell us something more about the future of this comet!!

This is the second comet discovery for PANSTARRS.

C/2011 L4 (PANSTARRS)
It's too early to speculate on this comet, but it has the potential to be a bright object in the STEREO-B spacecraft images in April 2013.

See the 2-body orbit diagram @ SECCHI (This 2-body method does not account for planetary perturbations of the comet.)

Yes, as we wrote on the post, in the next weeks we'll know something more about the future of this comet.