After reading on the [Comets-ml] forum about a possible outburst of centaur 174P/Echeclus, we performed some follow-up remotely, from the Tzec Maun Observatory (near Moorook, Australia) through a 0.15-m, f/7.3 refractor + CCD. Stacking of 7 unfiltered exposures 300 sec each, show the presence of a sharp central condensation having R magnitude about 18. We noticed also the presence of a jet-like feature nearly 6-arcsec long, emanating from the central condensation toward PA 60. A faint, spiral-like coma, having a total magnitude of about 16 and a diameter of 40-arcsec, surrounds the central condensation, resembling much comet 29P during the early phase of one of its recurrent outbursts. 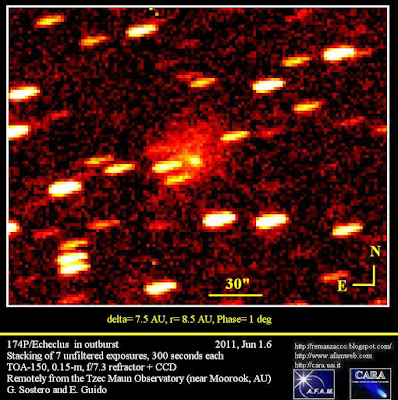 Centaurs, defined to have their perihelion outside of Jupiter (5.2 AU) and semimajor axis inside of Neptune (30.0 AU), have unstable orbits and have been extracted from the transneptunian objects (TNOs) population through perturbations by Neptune. So far only a few Centaurs have presented unambiguous evidence of cometary activity. The first Centaur known to present cometary activity was Chiron.


Below you can see some of our images dated back to 2006 when the coma was first discovered by Choi & Weissman: 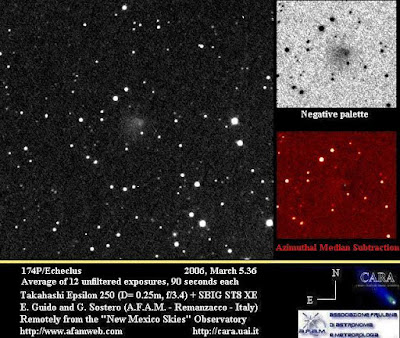 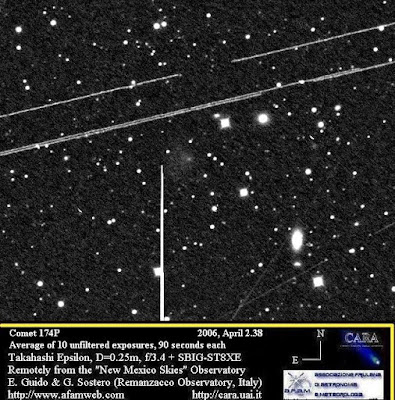 Thank you guys for keeping an eye on the centaurs.