We tried its follow up at first on 2012, March 23.8, when this object was still listed in the NEO-CP webpage as "TF85899". We operated from the Malina River Observatory (Povoletto, Italy) through a 0.3-m, f/4.7 reflector + CCD, under a hazy sky. On our stackings we found a faint and narrow, streak, about 2-arcmin long, oriented toward PA 295 deg.

This feature was very close to the expected position of "TF85899" however, due to its faintness (R about 19.2) and curious shape, we suspected it migth be a noise, rather than a real object, so we decided to go for a second night of follow-up, just to make sure. On 2012, Mar. 25.8, we repeated the observations of this object with the same set-up, and found again an odd aspect: kind of elongated and narrow tail, at least 30" long, toward PA300 (in these mages we suspected that the tail might be longer than this, however our observations were hampered by a bright, nearby field star). The central condensation was very difficult to locate, hampering its precise astrometric measurement.

Meanwhile other observers reported about its curious shape in a the [Comets-ml] forum, so we had an indipendent confirmation that what we observed on Mar. 23.8 was actually a real (albeit odd) cometary object, and not an artefact.

Our confirmation image of March 23 (click on it for a bigger version): 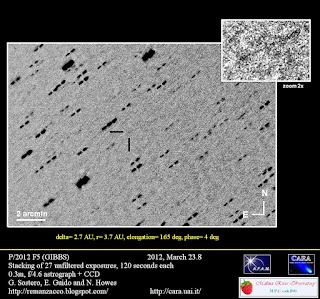 According to the preliminary orbital elements issued by the Minor Planet Center, P/2012 F5 has an orbital period of 5.32 years, an inclination on the ecliptic of 13.5 deg, semi-major axis of 3 AU and en eccentricity about 0.4. Its perihelion was reached in September 2010.