On 2012, March 21.6 we started an observing session to recover the periodic comet P/2005 JY126. We found an object of magnitude ~19.6 located 8.5 arcsec west of the nominal position. Stacking of three R-filtered exposures, 120-sec each, obtained remotely, from the Siding Spring Faulkes Telescope South through a 2.0-m f/10.0 Ritchey-Chretien + CCD, under good seeing conditions,shows that this object appears slightly "soft" compared to the nearby field stars of similar brightness.

On 2012, March 22.4 we have been able to obtain a second night of observations by stacking of 29 R-filtered exposures, 120-sec each, obtained remotely, from the iTelescope network (near Mayhill, NM) through a 0.25-m f/3.4 reflector + CCD.

Below you can find our recovery image of 2012, March 21.6. The red square shows the nominal position, while the circle shows where we actually found the comet. 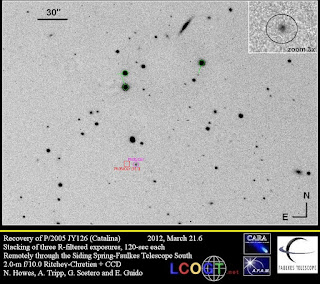