We performed some follow-up measurements of this object, while it was still on the neocp, remotely from the H06 ITelescope network (near Mayhill, NM) on  2012, Jul. 14.3, through a 0.51-m f/6.9 reflector + CCD.  No cometary features are visible in our images, the object has the same aspect of the nearby field stars of similar brightness.

Our confirmation image, stack of 10x10-second exposures (click on it for a bigger version): 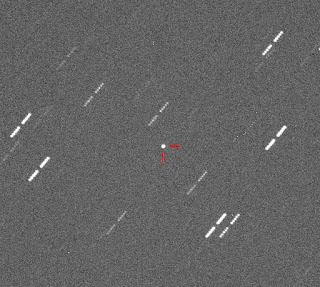 Below you can see an animation showing the movement of 2012 NJ (each frame is 10-second exposure). Click on the thumbnail for a bigger version: