It was classified as a PHA ((Potentially Hazardous Asteroid). PHA are asteroids larger than approximately 100m that can come closer to Earth than 0.05 AU. None of the known PHAs is on a collision course with our planet, although astronomers are finding new ones all the time. 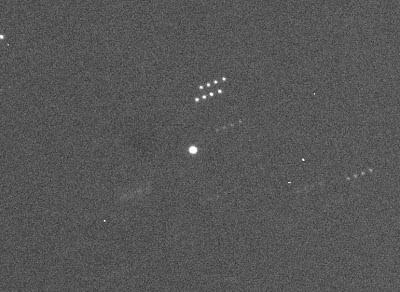 Below you can see a short animation showing the movement of 2012 QG42 (each frame is a 10-second exposure). Click on the thumbnail for a bigger version:

"Critter is still observable but the phase angle is now around 70° whereas most  of the data are from < 20°. The amplitude and shape of the curve may be evolving  and so it becomes more and more difficult to merge all the data into a single  set. Ideally, a data set taken over the next 24 hours from stations widely-separated in longitude would be treated as "stand alone" and would help  with modeling - LOTS!" 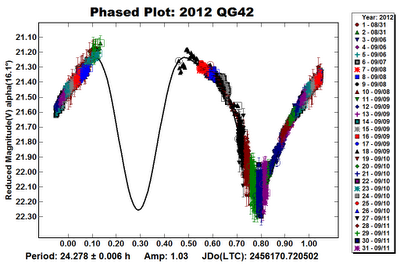 In the meantime the radar team announced on mpml mailing list that radar echoes from 2012 QG42 have been successfully  detected at Goldstone on September 13:

"We spent most of our time during the track improving the orbit by estimating Doppler and ranging corrections to the ephemerides. The radar data are  consistent with a slow rotation period as inferred from the lightcurves  reported by Brian Warner. We have one more track scheduled at Goldstone on Sep. 15 and four tracks at Arecibo on Sep. 14-17."

I'm just curious about the other objects in the picture. A couple of stars blink in and out of visibility and there appears to be another moving object. Where there clouds? Atmospheric disturbance?

I put together a video of this Potentially Hazardous Asteroid: http://youtu.be/MXdBy5b8Mrw

I'll be imaging the asteroid live when it's at closest approach (on the night of 13th/14th Sept) - we'll have a live free show on the homepage of Slooh Space Camera (slooh.com). I'll be using their Half Metre telescope at their Canary Islands Observatory.

@anonymous what looks like blinking stars, is actually noise from the ccd camera.

How big will it look to the naked eye when at its closest ?

This is so fascinating... Thank you and good luck too!

I see this has been listed as a potentially hazardous asteriod, will this affect us? What can we expect other than a beautiful show?????

@anonymous This asteroid will NOT be a naked eye object. In fact it will reach at maximum an average magnitude of 13.6 around September 10-12. This is a relatively bright magnitude for seasoned observers but far from being visibile with naked eye.

@Imurdreama None of the known PHAs is on a collision course with our planet. So nothing To Be Frightened Of.

@Team However, the name Potentially Hazardous Asteroid means what it implies, but still, some people focus on "hazardous", others on "potentially", and even others on "asteroid"!