The discovery of comet C/2013 A1 (SIDING SPRING) was announced on Cbet nr. 3368 & M.P.E.C. 2013-A14, issued on 2013, January 05. The comet was discovered on CCD images obtained by notable Australian observer R. H. McNaught with the 0.5-m Uppsala Schmidt telescope a few days earlier on Jan. 03 (with a discovery magnitude 18.6). Precovery images of the comet *(images taken but not known/recorded of the comet) by the Catalina Sky Survey from 8 December 2012 and Pan-STARRS from 4 October 2012 were subsequently found and then used in an attempt to determine the orbit.

Due to the uncertainty within the orbital calculations, there is also a very small possibility that the comet may impact Mars (~ from 0.1% to 0.01% according to how you handle the observations thus far. See here for more info about this).

By comparison below you can find a table of the the closest known approaches to the Earth by comets published on Minor Planet Center website. This list is intended to be complete for comets discovered after 1700 that approached the earth to within 0.1020 AU. It also includes a number of well-documented earlier approaches by periodic comets. C/1491 B1 allegedly came to within 0.0094 AU on 1491 Feb. 20.0 TT, but the orbit of this comet is very uncertain. 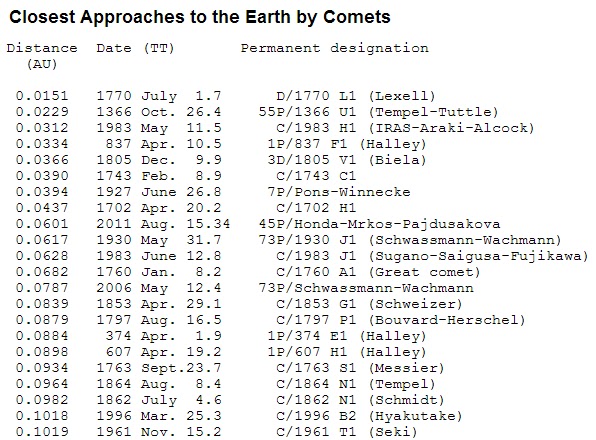 The plots below made by Aldo Vitagliano with his software Solex through a MonteCarlo generation of clones, "shows a picture of the current prediction taken about half an hour before the possible impact. The generation of clones was made assuming equal weights on all observations (one discarded) and an esd of. 0.5 arcsecs. In total, 2000 clones are represented.......The blue dot represents the "old" nominal solution. The white dot is the new nominal solution and the magenta dot is an impactor. One grid square is 100,000 km and the XY axes are in the plane of the Mars' orbit." (click on the image below for a bigger version)

In the second plot the plane is rotated by 90°, so the axes are now X and Z (Z perpendicular to the Mars' orbital plane). The origin is not longer fixed on Mars, but is fixed on the nominal solution, and the plot shows how Mars moves with respect to the cloud. (click on the image below for a bigger version)

Below you can see an image of comet C/2013 A1 (single 80-second exposure. Click on the image for a bigger version).  Our team will be closely monitoring this comet and feeding our observations to the minor planet centre to hopefully assist in resolving the orbit, and helping determine whether or not this comet will impact Mars. 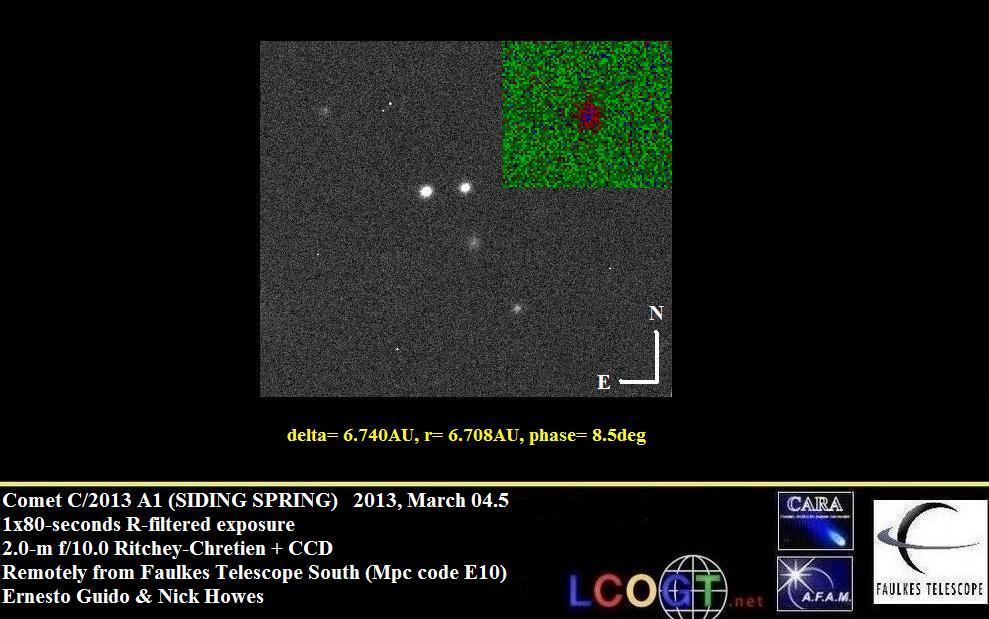 A plot published on NASA/JPL website shows how comet C/2013 A1 will appear as seen from Mars. The "best observing" occurs when the comet's total brightness is at least magnitude 12 and its elongation from the Sun is 30° or larger.

According to the S&T article (see link above in the post):

In the attempt to extende the observational arc of comet C/2013 A1, we perfomed some follow-up remotely from the Faulkes Telescope South (mpc code E10) on 2013, March 07.5 through a 2.0-m f/10.0 Ritchey-Chretien + CCD. Below you can see our image, stack of 11x80-seconds R-Filtered exposures. The galaxy just below the comet in the image is PGC177709. Click on it for a bigger version. 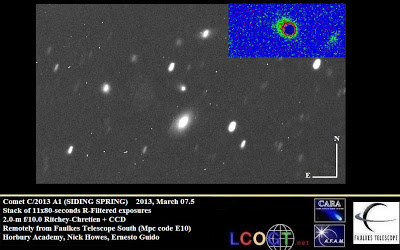 Below you can see an animation (spanning 25 minutes and composed of 11 exposures, 80 seconds each) showing the movement of comet C/2013 A1. Click on the thumbnail below for a bigger version.

Images of taken in collaboration with the Faulkes Project and Horbury Academy. Faulkes Telescope is operated by Las Cumbres Observatory Global Telescope Network.

After the latest observations, the probability of impact according to JPL is of 1 in 10000. Aldo Vitagliano, author of the software Solex, created a video showing how the comet should miss Mars.  In the video Mars is the red disk at the center of the video. The line-of-sight is in the plane of Mars' orbit, and the vertical axis of the plot is perpendicular to the Mars' orbital plane. The movie shows 2000 MonteCarlo clones of the comet, created assuming a standard error of 0.5 arcsecs for the observations. The (retrograd) cloud comes from below the orbital plane and crosses it before Mars arrives. See the video below.


While assuming a standard error of 1 arcsecs for the observations, this results in a more "expanded" cloud of possible comets, and gives a small residual impact probability. See second video below.

Please click here for a selection of some of the most significant results and images obtained from the observation of this flyby on 2014, October 19.

If you query JPL's Horizons ephemeris generator (via the telnet interface) you currently get an impact probability of 1 in 640, and while this approximation isn't as reliable as what e.g. Sentry produces for NEAs, it's an ... interesting number.

Any chance that one of the Mars probes will be able to photograph it?

According to the S&T article (cited in the post):