Asteroid (285263) 1998 QE2 was discovered on Aug. 19, 1998, by the Massachusetts Institute of Technology Lincoln Near Earth Asteroid  Research (LINEAR) program.

(285263) 1998 QE2 will be a great Goldstone radar target May 30 through June 9. This is going to be one of the best radar targets of the year. Radar images from the Goldstone antenna could achieve resolutions as fine as 3.75 meters. 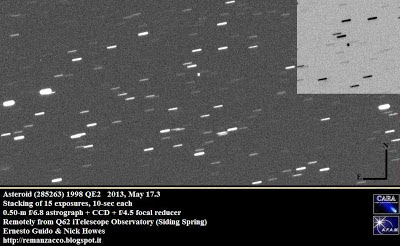 Below you can see a short animation showing the movement of 1998 QE2 (15x10-second exposures). Click on the thumbnail for a bigger version:


Radar images of asteroid 1998 QE2 obtained on the evening of May 29, 2013, by NASA scientists (led by scientist Marina Brozovic) using the 70-meter Deep Space Network antenna at Goldstone, Calif., show that it is a binary system.

According to the JPL press release: "Radar images suggest that the main body, or primary, is approximately 2.7 kilometers in diameter and has a rotation period of less than four hours. Also revealed in the radar imagery of 1998 QE2 are several dark surface features that suggest large concavities. The preliminary estimate for the size of the asteroid's satellite, or moon, is approximately 2,000 feet (600 meters) wide. The radar collage covers a little bit more than two hours. In the near-Earth population, about 16 percent of asteroids that are about 200 meters or larger are binary or triple systems."

We performed some follow-up measurements of this object on 2013, May 31.3 (few hours before its close approach), remotely from the iTelescope Observatory (H06 Mpc code), through a 0.25-m f/3.4 reflector + CCD. Below you can see our image, 1 single exposure of 180 seconds, taken with the asteroid at magnitude ~11.0 and moving at ~ 21.72 "/min. The asteroid is trailed in the image due to its fast speed. Click on the image below to see a bigger version. North is up, East is to the left. 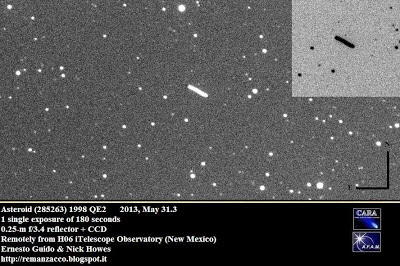 Below you can see a short animation showing the movement of 1998 QE2 (20 consecutive 10-second exposures). North is up, East is to the left. Click on the thumbnail for a bigger version: