Comet C/2012 S1 (ISON) will get to within 0.012AU of the Sun (extremely close) at the end of  November 2013 and then to ~0.4AU from Earth at the end of December 2013! According to its orbit, this comet might become a naked-eye object in the period November 2013 - January 2014. And it might reach a negative magnitude at the end of November 2013. For more info about the discovery please see our previous post here. While here & here you can read our October 2012 updates about comet ISON.

Our Team working with a suite of Hubble sized telescopes in Australia, Hawaii and the Canary Islands is collaborating with a range of professional scientists in an attempt to get high spatial resolution data on comet C/2012 S1 (ISON). Supported by the Liverpool John Moores Astrophysics Research Institute and the Faulkes Telescope Project we have been imaging C/2012 S1 ISON since the day it was  discovered, being part of the discovery MPEC for the comet ourselves.
Our recent images taken with the 2m Telescopes on La Palma are being worked on as part of an ongoing collaboration which started with Comet 103P/Hartley 2 with Nalin Samarasinha, a Senior Scientist at the Planetary Science Institute (PSI) in Tucson, AZ, USA. Nalin, a specialist in comets at the Planetary Science Institute, has been looking at the detailed structure of the near nucleus coma of comet C/2012 S1 ISON using data we are delivering in to the PSI. (click on the images below to see a bigger version). 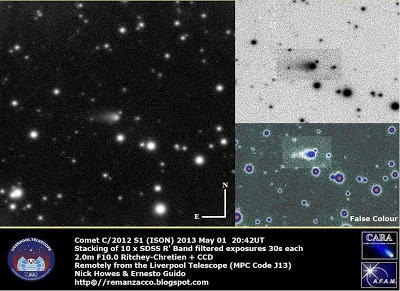 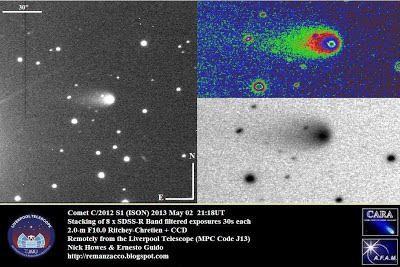 Most recently, Nalin had looked at image comparisons for our team’s dataset from May 02, 05, and 07 taken with the F10/2m telescope on La Palma, using an extremely sensitive camera, perfectly suited for detailed comet work.

The images shown here are 28x28 pixel crops of the inner region with the optocenter (assumed to be the nucleus) at the center. (click on it for a bigger version)

"This comparison shows that the sunward feature we suspected from images taken on 02/05/2013 is originating slightly north of west and then the position angle (PA) of the feature (measured from north through east) increases as one moves away from the optocenter" quotes Nalin. The exact PA of this feature is tricky to determine, as it will depend on how far away from the optocenter that you look at and when near the optocenter, PAs can be very uncertain. Nalin's interpretation is that the curvature of this feature is not due to any rotational effects but is due to radiation pressure pushing dust grains towards the tail. Ultimately, this feature merges in with the tail.

This amazing result from a ground based set of observations, is in close agreement with features detected by the Hubble Space Telescope in images taken in April of this year. It goes to show how valuable ground based observations can be.

As the comet comes closer to the Earth the spatial resolution will improve, and we should get more detailed views on the coma structure. Ongoing collaborations with scientists with the amateur community have been discussed in many recently published papers, and  this is a prime example of one that is delivering valuable scientific data on a hugely interesting object.

by Nick Howes and Ernesto Guido