Observations of the Herschel Space Observatory

The Herschel Space Observatory was a European Space Agency-built and -operated space observatory, active from 2009 to 2013. It was studying the Universe by the light of the far-infrared and submillimeter portions of the spectrum revealing new information about the earliest, most distant stars and galaxies, as well as those closer to home in space and time. It has also taken a unique look at our own solar system. Herschel Space Observatory was the largest infrared telescope ever launched, carrying a single 3.5-metre mirror.

In the afternoon of April 29, 2013 Herschel ran out of liquid helium. To declare end-of-helium (EoHe) a number of key temperature sensor upper limits had been defined, and with two of them attained, EoHe had formally been reached. Herschel has made over 35000 scientific observations, amassing more than 25000 hours of science data from about 600 observing programmes. Finally on June 17, 2013, engineers for the Herschel space telescope sent final commands to put the decommissioned observatory from its orbit around the L2 point 1.5 million kilometres from the Earth into its “graveyard” heliocentric parking orbit.


Last week we decide to follow-up the "Herschel Space Observatory" in his new orbit using the Faulkes Telescopes (2.0-m f/10.0 Ritchey-Chretien + CCD - operated by Las Cumbres Observatory Global Telescope Network).  In fact, determining an accurate orbit now is important, because its increasing distance will make it fainter and much harder to keep track of in the intervening years.

"The observation was a particular challenge as the final manoeuvres made by the ESA flight control team resulted in the observatory being at a slightly different position on the sky compared to that predicted by existing orbital data".


We successfully imaged the Herschel on 26 & 27 June 2013 with Faulkes Telescope North and again on 01 July 2013 with the Faulkes Telescope South at magnitude ~20. (follow-up observations have been obtained by T. Vorobjov on June 28, 2013 at Kitt Peak - MPC code 695).  It was already a couple of arcminutes off prediction. See our image below, stacking of 7x120 seconds exposures (click on it for a bigger version). 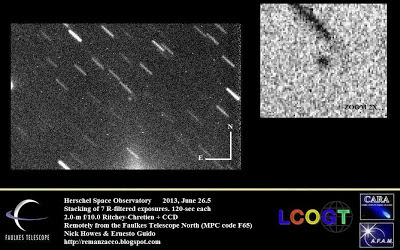 Below you can see a short animation showing the movement of the Herschel Space Observatory during our first observing session of June 26, 2013. Click on the thumbnail for a bigger version.

Great story and a beautiful project ! Very well done! congratulations to the team !

yes, thank you Erik, keep up your great work also