Following the posting on the Central Bureau's Transient Object Confirmation Page about a possible Bright Nova in Del (TOCP Designation: PNV J20233073+2046041) we performed some follow-up of this object through a 0.43-m f/6.8 astrograph + CCD from MPC Code I89 (iTelescope network - Nerpio, Spain) and through a 0.25-m f/6.3 Schmidt-Cassegrain + CCD from MPC code C82 (Sorrento, Italy).

On our images taken on August 14.8, 2013 from MPC I89 we can confirm the presence of an optical counterpart with unfiltered CCD magnitude 6.8 at coordinates:


On our images taken on August 14.8, 2013 from MPC C82 we can confirm the presence of an optical counterpart with unfiltered CCD magnitude 6.9 and R-Filtered magnitude 6.1 at coordinates: 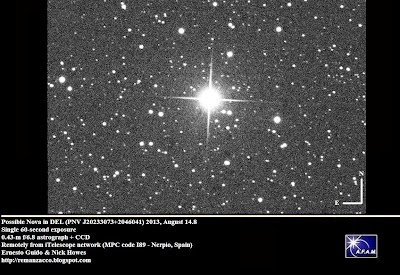 An animation showing a comparison between our confirmation image and the archive POSS2/UKSTU plate (R Filter - 1990). Click on the thumbnail for a bigger version:

According to ATel #5279 an optical spectrum of NOVA DELPHINI 2013 was obtained (through patchy cloud) by the FRODOSpec instrument on the 2m robotic Liverpool Telescope on La Palma at 2013 August 14.909. The spectrum contains strong Balmer series emission exhibiting P Cygni profiles with velocities ~2000 km/s. A number of Fe II (also P Cygni profiles) and (weak) He I lines may be present. This object is likely to be a newly erupting classical nova (in the early fireball stage). A grating spectra, obtained by S. N. Shore et Al. on 2013 Aug. 14.87 with the coude spectrograph at the 2 meter Zeiss telescope of the Ondrejov Observatory, shows strong H-alpha emission with a P Cyg profile extending to a maximum radial velocities of -2300 km/s (absorption, EW approx 8.1A) and +2400 km/s (emission, EW \approx 52.9A) with no terminal edge at high negative velocity. The spectrum is typical of a classical nova -- possibly CO type -- in the early (optically thick) fireball stage but with indications of the onset of the recombination event.

According to the preliminary light-curve from AAVSO (see image below), NOVA DELPHINI 2013 reached a peak V magnitude ~ 4.3 on August 16.4.


Some interesting remarks about the nova are included in the ATel #5297 by Munari et Al.:

"Nova Del 2013 seems to have reached maximum brightness on August 16.45 UT at V=4.3 mag. It immediately entered the decline phase and it is declining pretty fast, of the order of 1 mag in a day, qualifying it as a very fast nova if the pace will be maintained on the coming days. Also the rise toward maximum has been real fast, 2 mag in about 1.5 days according to our photometry and AAVSO database. The total outburst amplitude is 12.6 mag in V, adopting V=16.9 mag for the progenitor as given by GSC 2.3.2."

Our image and animation showing the difference in brightness of NOVA DELPHINI 2013 between August 14.83 (V mag. ~6.3)  and August 15.93 (V mag. ~5.1). Images obtained with the same instrumentation and exposures. Click on the image for a bigger version. 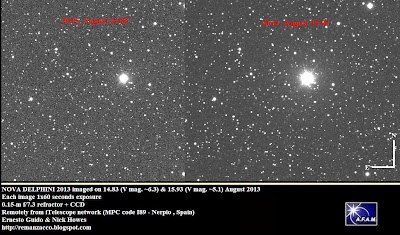 Click on the thumbnail for a bigger version of the animation.

While below there is a normalized spectra obtained by Fujii-san on August 15, 2013 (click on it for a bigger version).

According to Taichi Kato on [vsnet-alert 16230], NOVA DELPHINI 2013 reached a plateau, no fading.

The most recent AAVSO data indicate that the nova stopped fading (or even slightly brightened), and currently stays slightly above mag 5.0.  This behavior is consistent with Fujii-san's spectrum, which showed features of a premaximum nova. This nova is not a very fast nova as reported in ATEL 5297 (Munari et al.).


by Ernesto Guido, Nello Ruocco and Nick Howes
Pubblicato da Team a 12:13 AM