Whilst working on a long term morphology study on comet C/2012 K1 with N. Samarasinha and B. Mueller using the 2-meter Liverpool Telescope, we were alerted of the fragmentation event in comet C/2011 J2 and so diverted the telescope to this comet for a few days.

Below you can see our follow-up image that clearly shows comet C/2011 J2 (LINEAR) and its seconday B component. Click on it for a bigger version. 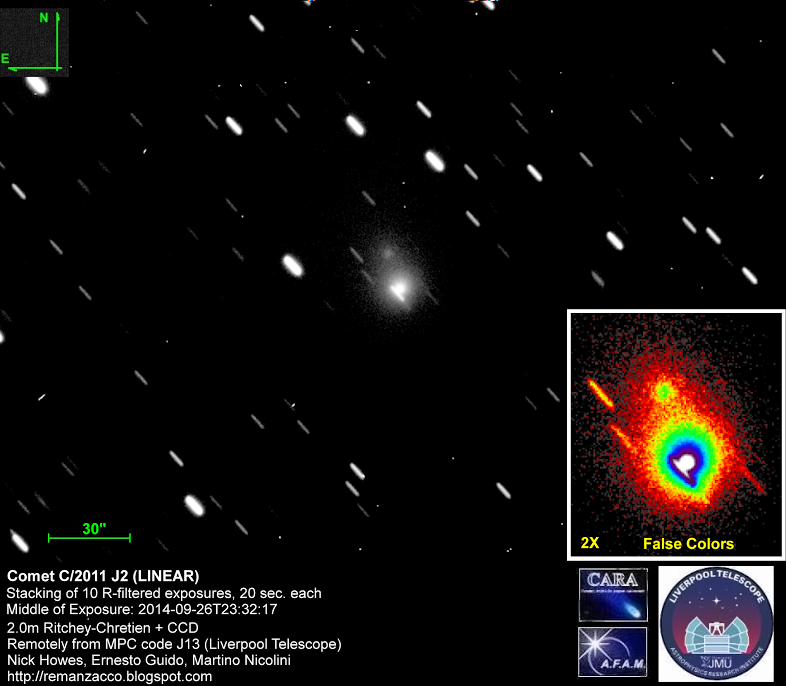 For some examples of past comet fragmentation events please check the following links:

In the video below we show a first attempt to measure component B drifting movement from the nucleus of comet C/2011 J2 on 2014, through a 2.0-m f/10.0 Ritchey-Chretien + CCD (La Palma-Liverpool Telescope). Blinking the frames of Sept. 26.9 and Oct 02.9, there is evidence of fragment B moving off from the main comet component while profile graphs show that fragment is fading and less condensed. On Sept 26.9 the distance is of 14.4 arcsec. whilst on Oct. 2.9 the distance from the nucleus is of 15.6 arcsec. Click here to see a bigger version of the video.