According to its absolute magnitude (H=28.8) this asteroid has an estimated size of roughly 3-10 meters, so it is a small object. We have been able to follow-up this object soon after his discovery while it was still on the neocp, from the Siding Spring-Faulkes Telescope South on 2012, May 28.4, through a 2.0-m f/10.0 Ritchey-Chretien + CCD.

Below you can see an image (stack of 5x5-second exposures) showing the asteroid. Click on the thumbnail to see a bigger version: 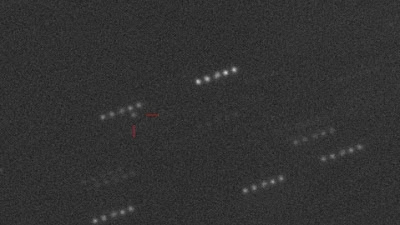 Below you can see an animation showing the motion of 2012 KT42. Each frame is a 5-second exposure through the FTS 2.0-m telescope. Click on the thumbnail to see a bigger version:

While there is no cause for concern, this is one of the closest approaches recorded. The table below shows the top 20 closest approaches by NEOs (Near-Earth Objects) sorted by nominal distance. The table has been computed on the NASA/Neo-JPL website. 2012 KT42 is the sixth closer approach to date. (2011 CQ1 is the closest non-impacting object in the asteroid catalog to date. The event that took 2008 TC3 into the earth's atmosphere is not included). Click on the thumbnail to see a bigger version: 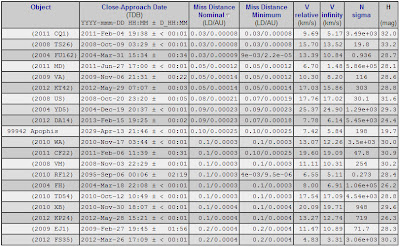 On mpml mailing list, Andrew Lowe pointed out that on May 29 at about 10:10 UT,  2012 KT42 the minimum geocentric elongation from the center of the sun will be 0.1 degrees, so given the parallax there will be a transit across the sun. But with a diameter of about 5m, the object could be only about 0.07" across against the solar disk. Aldo Vitagliano provided this map of the transit (computed by his software Solex). Click on the thumbnail to see a bigger version:

According to calculation made by P. Tricarico, 2012 KT42 has experienced a partial eclipse while approaching Earth on May 28, 2012 between 14:05 UTC and 21:45 UTC, before the flyby. See animation below (click on it for a bigger version). Probably the first case ever of an approaching asteroid experiencing an eclipse and a transit during the same flyby with Earth. More info about this on Tricarico's website.

"2012 KT42" was tracked by the NASA Infrared Telescope Facility (IRTF) on Mauna Kea, Hawaii as it whizzed inside the orbital distance of Earth geosynchronous satellites. Near-infrared spectral color measurements obtained simultaneously with the facility spectrograph (SpeX) while tracking the asteroid reveal a color signature interpreted as a carbon-rich composition (perhaps analogous to carbonaceous chondrite meteorites) from which a moderately dark reflectivity (albedo) is inferred. By knowing both the reflectivity and visible brightness of the object, the deduced size is about 7 meters.

The presented movie shows the NASA telescope first acquiring, then “locking on target” and tracking with the asteroid as it whizzes across the sky  — hence stars appear only as passing streaks. The movie is compiled from 2-second exposures obtained by the MORIS camera played back at 15 frames per second. (Thus the movie plays at about 30 times actual speed.) An internal reflection within the camera can be seen faintly to the left. Frequent up/down jumps of the image are normal telescope motions as part of the spectral data collection process.

Will a pass this close alter the asteroid's orbit, and if so, how long will it be before a new orbit can be calculated?

Will a pass this close alter the asteroid's orbit SIGNIFICANTLY, and if so, how long will it be before a new orbit can be calculated?