Comet C/2011 L4 (PANSTARRS) was found by Pan-STARRS 1 telescope on Haleakala, Maui, on the night of 2011, June 5-6. At the moment of discovery the comet was at a distance of nearly 7.9 AU from the Sun (discovery magnitude 19.4). According to his orbit, around perihelion in March 2013 the comet would be located only 0.30 AU from the Sun and might become a bright naked eye object ( ~ magnitude 1). For more info about the discovery of this comet, see our previous post on this blog of 2011, June 09. 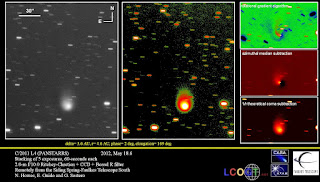 It's interesting to notice a very compact coma, this means active dust production even at 4.6 AU away from the Sun (very good news). The image processing shows an asymmetric coma, probably due to a line-of-sight effect. According to our previous experiences, the "jet-like" structures evidenced by the rotational-gradient  filtering, shows very likely the striking asymmetry of the coma/tail, instead of a genuìne activity due to the outgassing of the nucleus (that we are unlikely to resolve, at this time). This idea is confirmed by the appearance of the comet through the two other algorithms we applied, the azimuthal median subtraction and the 1/r theoretical coma subtraction.

Anyway, our R-filtered image (that are showing mainly the dusty coma) shows that comet Panstarrs is pretty active, even at such big distances from the Sun (this is a good sign for future expectations on a bright comet, next year).

C/2011 L4 probably took millions of years to come from the Oort cloud. After leaving the planetary region of the Solar System, the post-perihelion orbital period is estimated to be about 110000 years.

can't wait to meet him. still a question, he'll be visible around which constellation?