On 2012, May 22.6 we started an observing session to recover the periodic comet P/2005 N3. We found an object of magnitude ~20.4 located ~4 arcmin north-east of the nominal position. On May 25.6 we have been able to obtain a second night of observations.

Stacking of, respectively, seven and thirteen R-filtered exposures, 60-seconds each obtained remotely from the Haleakala-Faulkes Telescope North on 2012, May 22.6 and 25.6, through a 2.0-m f/10.0 Ritchey-Chretien + CCD, shows that comet P/2005 N3 (LARSON) has a ill-defined central condensation of R magnitude about 20.3, surrounded by a weak coma 5" in diameter, and a faint and broad tail, nearly 8" long toward the south-west.

Below you can find our recovery image of 2012, May 25.6 (click on the image for a bigger version) 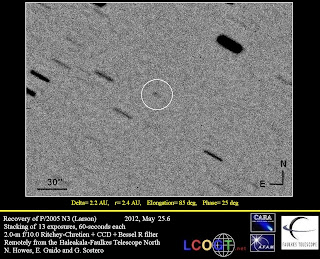