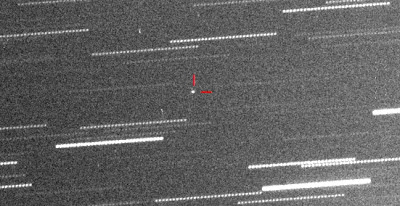 Below you can see a short animation showing the movement of 2012 TC4. Click on the thumbnail for a bigger version:

The map below (calculated on the Armagh Observatory website) shows all know asteroids in the neighbourhood of the Earth updated to October 08, 2012. The red oval surrounding the earth represents 3.84 million kilometres (projected onto the plane). This is a distance equal to 10 Lunar distances. Any object currently inside this distance will be highlighted in red, in this case 2012 TV & 2012 TC4. Click on the image for a bigger version. 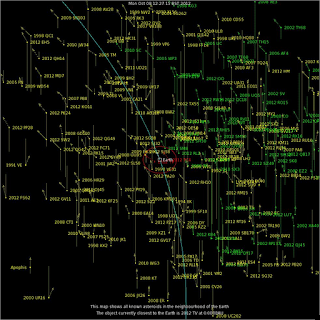 Below you can see our image (single 180-second exposure) of 2012 TC4 obtained on October 11 at 21UT, few hours before its close approach. At the moment of the image, the asteroid was of magnitude ~14.4 and moving at ~185"/min. Click on the image for a bigger version. 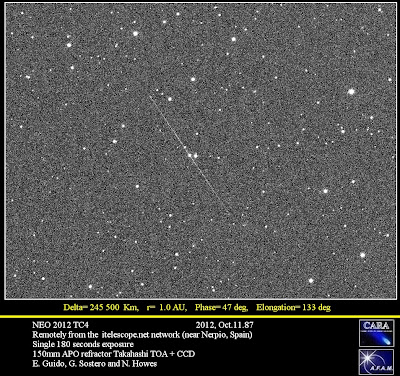 Around what time will be best to see this asteroid via telescope in North West New Jersey?

Unfortunately now it's too late to observe it. In fact, after the close approach at 0531UT of today, the asteroid is rapidly decreased in brightness and now it is very faint.

I caught something shooting across the horizon vertically, here in Australia on camera. I am just trying to figure out if it could have been this asteroid.

So, when will this asteroid (or any other of those identified) return? Or, where is any data re: return/frequency/round trip of these NEOs, assuming that they have orbits?