According to reports issued by a number of observers to several astro-forums, comet 168P/Hergenrother is currently experiencing a bright phase: over the course of several nights, it increased in brightness by several magnitudes, reaching a total visual magnitude of approximately 8. We performed some follow-up on it remotely, on 2012 Sept. 26 and Oct. 3, through the 2.0-m f/10.0 Ritchey-Chretien + CCD + Bessel R filter of the Faulkes Telescope South, at Siding Spring (click on the image below for a bigger version). 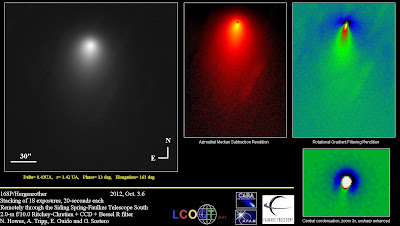 Subtracting the two images (after normalization of the stackings) of Sept. 26  from Oct. 3, the evolution of the central condensation became obvious. To some  extent, the difference might be due to a slight change in the perspective angles  (e.g. its phase angle passed from 10 to 13 deg), however we consider that a part  of what we see in the panel, is a genuine evolution of the central condensation  due to its active phase (click on the image below for a bigger version). 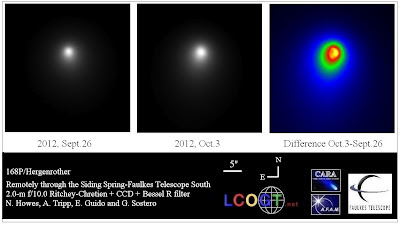 The photometric data supports the observed evolution: our afrho data on Sept. 26  shows a peak of about 670 +/- 100 cm at 2230 km from the photocenter, while on  Oct. 3 we measured an afrho of 1210 +/- 150 cm peaking at a radius of about 3000 km from the photocenter.  This seems to indicate a two-fold increase of the afrho  activity within the central condensation in a matter of a week, as well the  apparent recession of the activity peak from the central condensation. A change in the photometric profile of the coma is also obvious, from the comparison of the two panels, with the Oct. 3 graph significantly wider and less  steep, compared to that of Sept. 23. 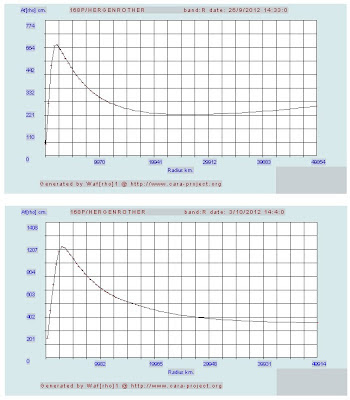 By clicking on the thumbnail below you can see a short animation of comet 168P/Hergenrother on our images of 2012 Sept. 26:

So our follow-up confirms and adds scientific data to the previous reports: currently comet 168P/Hergenrother is alive and rather active.