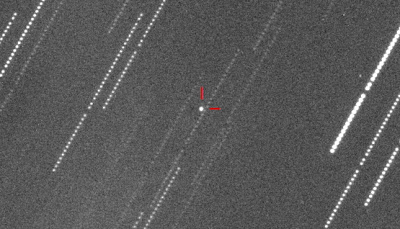 Below you can see a short animation showing the movement of 2012 TV (each frame is a 15-second exposure). Click on the thumbnail for a bigger version:

Below you can find the resulting lightcurve for asteroid 2012 TV using data from two observing sessions on this asteroid obtained separately by Lorenzo Franco and our team. The lightcurve data appears to show a period of 0.0525 h +/- 0.0001 and an amplitude of 0.51 mag.  Click on the image for a bigger version. 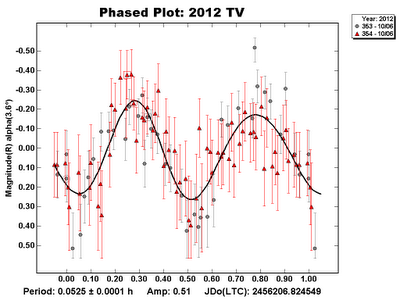 Our photometry paper has been published on  the latest Minor Planet Bulletin (MPB 40-1) on page 44. You can download it on MPB website or here.

Thanks, gentlemen, for a most thorough presentation of 2012 TV! After much hardware and software work we finally have a working astrograph.

Congrats for this discovery, well done!!