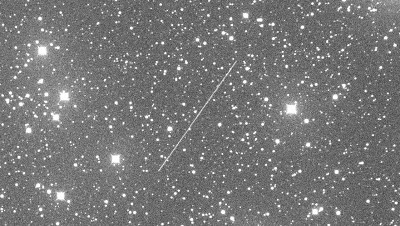 Below you can see a short animation showing the movement of 2012 XE54 (three consecutive 60-second exposures). North is up, East is to the left. Click on the thumbnail for a bigger version:

According to calculations made on December 10 by P. Tricarico, 2012 XE54 "will likely cross the Earth's shadow, causing a partial eclipse of the asteroid a few hours before reaching its minimum distance with the Earth. Asteroids eclipsing during an Earth flyby are relatively rare, with the first known case of asteroid 2008 TC3 which was totally eclipsed just one hour before entering Earth's atmosphere over Sudan in 2008, and asteroid 2012 KT42 experiencing both an eclipse and a transit during the same Earth flyby in 2012".

The plot below shows the expected average apparent magnitude of asteroid 2012 XE54 (line), the filter-corrected magnitudes reported (blue boxes) and the dip due to the eclipse (red curve).

This prediction has been confirmed by observations made by Peter Birtwhistle (J95 mpc code). Peter put up a very preliminary lightcurve (see graph below) covering the eclipse earlier today, showing minimum centred around approx. 01:37:00 UT, probably around mag ~ +17.5.