This comet is named after the singing teacher and amateur astronomer John Grigg and after J. Frank Skjellerup, an Australian telegraphist working at the Cape of Good Hope in South Africa. On July 10, 1992, comet 26P was visited by Giotto spacecraft after its successful close encounter with comet Halley. The Giotto camera has been damaged in the Halley flyby and there are no pictures of the nucleus. In 1972 the comet was discovered to produce a meteor shower (first predicted by Harold Ridley), the Pi Puppids, and its current orbit makes them peak around April 23, for observers in the southern hemisphere, best seen when the comet is near perihelion.

Our recovery image (click on the image for a bigger version): 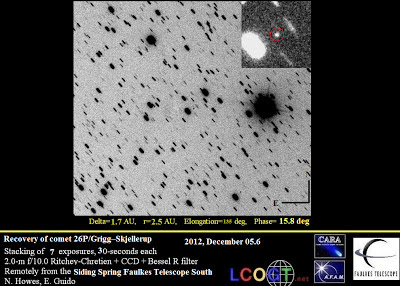 While below you can see an animation showing the movement of the comet (7 frames x 30 seconds each). North is up, East is to the left (click on the thumbnail below for a bigger version):

Comet 26P/Grigg–Skjellerup was last observed (before our recovery) on August 09, 2008 by mpc code 204 (Schiaparelli Observatory). While there is also a single night observation by F51 – Pan-STARRS 1,  Haleakala dated November 25, 2011, a comet recovery requires 2 nights of observations, "as it is not possible to unambiguously identify a comet by  position and rate alone without a second night of data to verify the orbit." (Hainaut et al. A&A 1997).

congratulations to the team with the recovery of 26P ! great work!