According to Minor Planet Circ. 16444: "Named after the Gaulish god, protector of the tribe. This totemic deity is well known because of the cartoon series "Les aventures d'Asterix" by Uderzo and Goscinny. This tells the stories of two almost fearless heroes living in the last village under siege in Roman-occupied Gaul in 50 B.C., and whose only fear is that the sky may fall onto their heads one day. Since this object is the Apollo object with the smallest inclination known, it is a good candidate to fall on our heads one of these days... But as the chief of the village always says: "C'est pas demain la veille..." Citation written by the discoverer and A. Maury and endorsed by J. D. Mulholland, who with Maury obtained the discovery plates."

Moreover, Toutatis will be the target of a flyby by the Chinese Chang'e 2 spacecraft on December 13, 2012   Chang'e 2 was originally launched to study the Moon but was diverted in April, 2012 for the asteroid encounter.

We performed some follow-up measurements of this object just few hours before its 2012 close approach, from the I89 iTelescope network (Nerpio, Spain) on  2012, Dec. 11.9, through a 0.15-m f/7.3 refractor + CCD. Below you can see our image, single 120-second exposure, taken with the asteroid at magnitude ~10.5 and moving at ~20.7"/min. The asteroid is trailed in the image due to its fast speed. At the moment of the close approach 4179 Toutatis will move at ~ 21.86"/min. Click on the image below to see a bigger version. North is up, East is to the left.

Below you can see a short animation showing the movement of 4179 Toutatis (40 consecutive 10-second exposures). East is up, North is to the right. Click on the thumbnail for a bigger version:

Toutatis passes by Earth’s orbit roughly every 4 years. Four years ago it didn’t come quite so close (0.0502 AU). But four years before that (in September 2004) it missed us by just 0.0104 a.u., less than a quarter of its distance this time. The next notable close approach of Toutatis will be November 5, 2069, when the asteroid will fly by at a distance of only 0.0198 AU (7.7 lunar distances). See graphs below (click on it for bigger versions).

Thanks to its proximity and size Toutatis was a strong target for radar imaging. Astronomers of NASA's Goldstone radar were tracking the asteroid as it passes by Earth and they obtained images of unprecedented clarity. Click on the image below for a bigger version.


According to  radar team member Michael Busch: "Toutatis appears to have a complicated internal structure. Our radar measurements are consistent with the asteroid's little lobe being ~15% denser than the big lobe; and they indicate 20% to 30% over-dense cores inside the two lobes.". This raises the interesting possibility that asteroid Toutatis is actually a mash up of smaller space rocks.  "Toutatis could be re-accumulated debris from an asteroid-asteroid collision in the main belt," he says.

The Chinese Chang'e 2 spacecraft has successfully imaged Toutatis during his flyby on December 13, 2012. See image below captured at 93–240 km distance between 16:30:09–16:30:24, maximum resolution 10 meters/pixel. Click on the image for a bigger version. 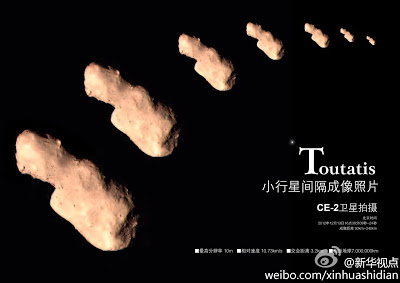 
This is the first time I've heard anyone give a definite (more or less) return frequency for a PHA. I've not been able to find a site online (that I can understand) that gives this info...

I left this question as a comment on photobucket, but thought I should maybe ask it here as well. There are several small objects moving from lower right to upper left in the multi-frame sequence of the close approach. Why? What is that?

Dear Bob, the animation has been made with 40x10-second exposures. The faint objects you see in the animation are only "noise" from the ccd camera.